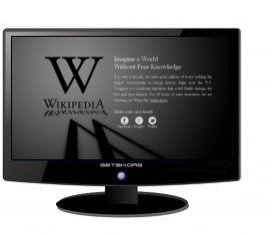 Try having a look around the internet today (Wednesday 18th January) and you'll soon run into a few roadblocks; especially if you're trying to reach one of the most popular and arguably best encyclopaedic resource around, WikiPedia.

Big media and its allies in Congress are billing the Internet blacklist legislation as a new way to battle online infringement. But innovation and free speech advocates know that this initiative will do little to stop infringement online. What it will do is compromise Internet security, inhibit online expression, and slow growth in the technology sector.

As drafted, the legislation would grant the government and private parties unprecedented power to interfere with the Internet's underlying infrastructure. The government would be able to force ISPs and search engines to block users' attempts to reach certain websites' URLs. In response, third parties will woo average users to alternative servers that offer access to the entire Internet (not just the newly censored U.S. version), which will create new computer security vulnerabilities as the Internet grows increasingly balkanized.

And don't think that its just the US that will be affected by this - business worldwide is going to be strangled by this US Internet Sanction, read more and show your support here https://blacklists.eff.org/

Sonassi is the only specialist Magento hosting provider with solutions powered by MageStack.