Take Windows with you ... 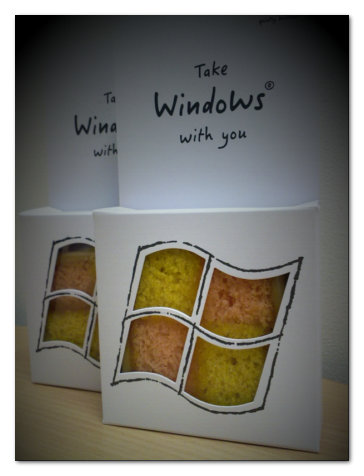 HTC dropped by today as expected to give us the world-wind tour of the HTC HD2 Windows Mobile Smartphone. Given I'm a Nokia fanboy, it was a hard sale, but I have to say I was pleasantly impressed. If not a bit iPhone-esque with its pinch zooming and kinetic scrolling, it worked well and didn't feel slow or laggy at all. But given its 1GHz CPU - I should hope not! The photos were also particularly impressive with its touch-focus and 5MP camera.

But who cares about the phone

... what goodies did we get? Well, we can't deny that bribery is the preferred method of business, and with food as the currency - you can't go wrong with our team. Today's bizarre gift from HTC was a Windows Mobile battenburg cake (featured left) - which I have to admit, was pretty creative. Also, one of the guys here are likely to win a free HTC HD2 just for participating!

All in all, it was a welcome break from the hard graft (don't tell the clients though!) and nice to see a clever new gadget!