After 3 successful years of growth, the time came for us to move locations. So we said farewell to our Regus office in Exchange Quay and said hello to the Dock Office, Salford Quays. We had toured many, many sites in Manchester and kept seeing the recurring theme of "Chrome & Glass" Regus-esque style serviced offices - but we were looking for something with a bit of history and a lot of character. Salford Quays isn't a typical location for character, but is an ideal location for the team - and only a stones throw from Media City. 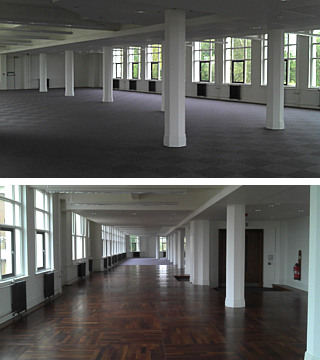 The Dock Office sits beside Trafford Road in Salford. It is a Grade II listed building, designed by Harry Fairhurst and Son, was built in 1925. Beside the building is the former gateway, also by Fairhurst, that once provided access to the docks. The words "Manchester Docks" once ran across the top of the gateway. On the right hand side of the entrance gateway you will find a plaque commemorating the opening of the Manchester Ship Canal by Queen Victoria on the 21st of May 1894. On either side are sculptural motifs of a ship's keel projecting out from the stonework.

It is a huge 36,000 square feet site, so plenty of space for expansion for us; vertically spanned across 4 stories.

So with character in spades, excellent condition and classically refurbished, the Dock Office was an ideal choice for Sonassi. Now its just time for the important decision, how to lay the office out ... Our first office at the Dock Office is 500 square feet, so we've got to get creative. 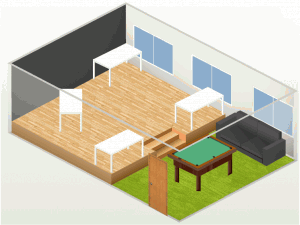 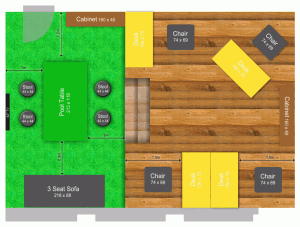 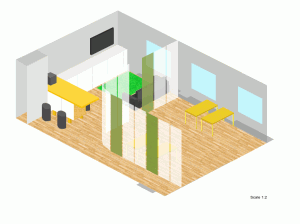 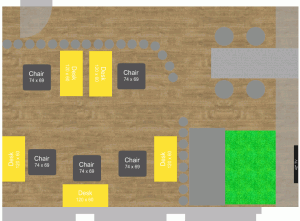 I thought of using a pool table (both for fun!) and to also serve as a meeting table, with a big 3 seater sofa behind.

Following a similar trend of the separation of work and rest areas, I came up with a slightly simpler concept that gave a lot more room overall, added additional storage and a kitchen area. Sheer curtains were used to divide the entry to the office and work area, so the office would still be light and airy with a sense of separation.

Concept 2 was the obvious choice, time to start decorating. 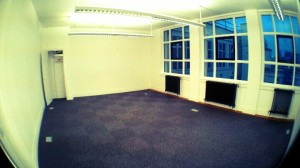 Starting out with the bare room, it is 9m x 6m, and thankfully, the designs I drew above were to scale. But you can get a feel for the blank canvas that we'll be working from - and you'll certainly appreciate why we've chose to decorate the room a bit before just throwing some chairs and tables in there. 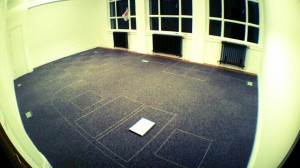 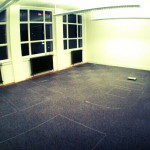 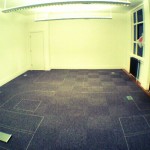 Well, we spend all day approving wireframes, mocking up wireframes - its seemed the logical choice to map out the room too. So I bought a few hundred metres of string and some push pins and went away with my tape measure mocking up the space to scale.

I even threw my trusty laptop down on one of the wire-framed desks for good measure.

With the raw layout of the room mapped out, I had a really good chance to visualise the concept and make sure the spacing was appropriate. It gave a real feel to the overall impression of the room and brought the whole idea to life.

Now I had to start finding furniture to do the job, so a trip down to Ikea was in order.

After a few nights on-line and a few trips to various retailers, I had all the furniture arranged - the small items were on site already, but the bigger items were just waiting for the courier to come drop them off.

The colour scheme was set to follow our main company branding, so some bright, lively greens and strong greys were ready to be brushed on the walls. 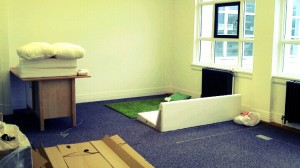 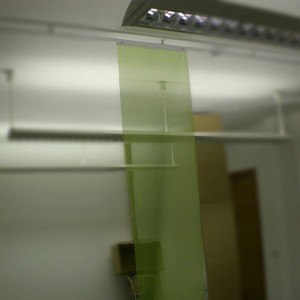 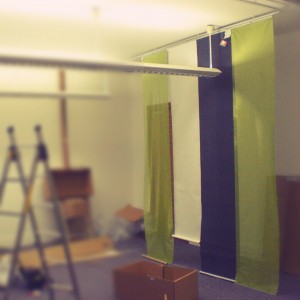 Testing out the colours 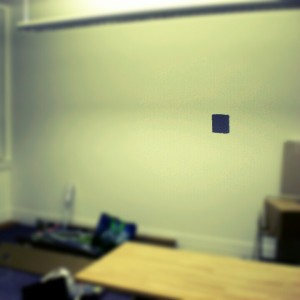 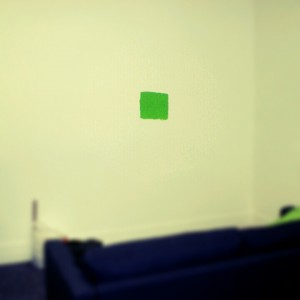 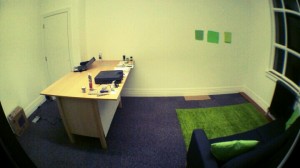 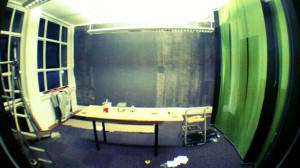 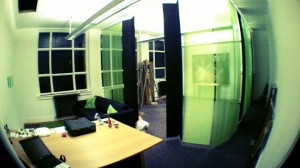 With the curtains up, most of the furniture assembled, walls painted, its starting to resemble something like the original designs. Behind the scenes, we had been busy pre-wiring the office with structured Cat6 for the phone and data points around the office. It only actually took about 20 hours to complete the decorating from start to finish. 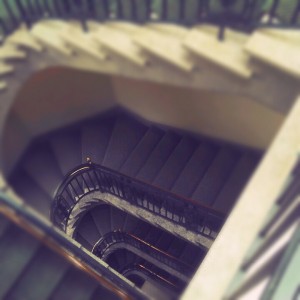 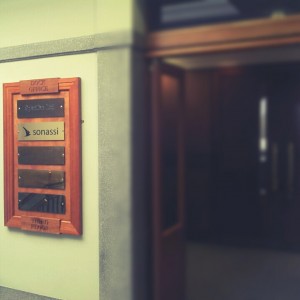 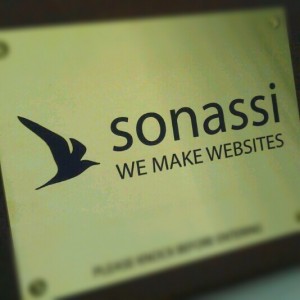 So now enter the break out space and kitchen area ... 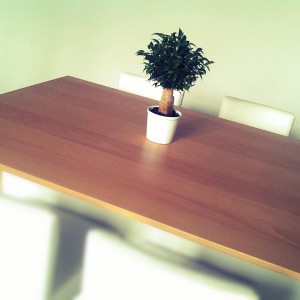 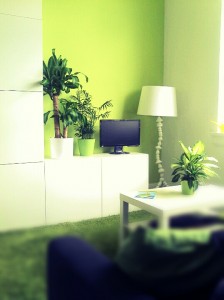 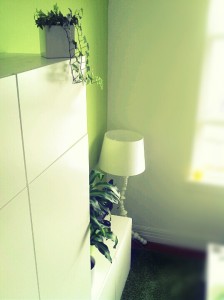 Freshly ground coffee, straight from the beans. So we've got espresso, lattes and cappuccinos on tap. The bright orange life ring might not make the most sense, but its in-fitting with the history of the building. Most offices in the old Dock Office have some kind of tribute to Salford Quay's former existence as Manchester's largest docks. We got the life ring as a moving in gift. 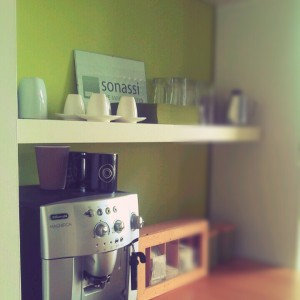 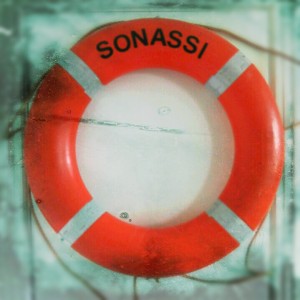 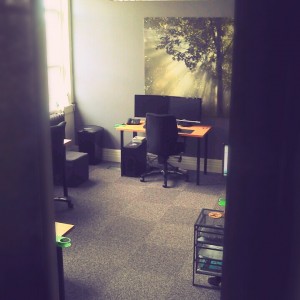 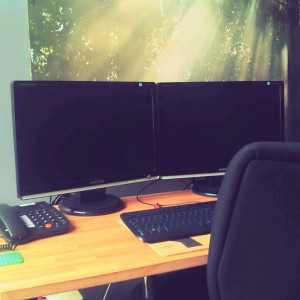 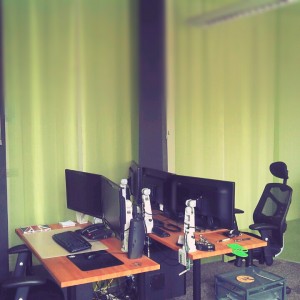 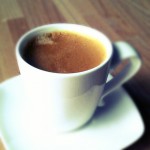 So come down and meet us

Our second office, the Dock Office should serve us well as we grow more over the coming months - but for now serves as an excellent, practical work space, relaxing chill out area and the birthplace of many Magento stores and Magento servers.

So don't hesitate to come down and talk about your project - the coffee is on us.